Interstitial cystitis is chronic inflammation of the wall of the bladder. Inflammation can lead to scarring, pinpoint bleeding of the bladder wall, and a decreased bladder capacity. Although the symptoms are similar to those of a bladder infection, there is usually no clear cause. 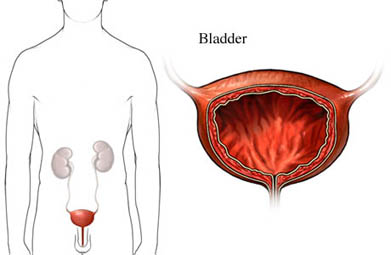 Because bacteria, fungi, or viruses are rarely found in the urine of people with interstitial cystitis, the cause is unclear. Possible causes include:

A risk factor is something that increases your chance of getting a disease or condition. Risk factors for interstitial cystitis include:

The symptoms of interstitial cystitis vary from person to person. They can also occur in cycles. Some people experience periods of intense symptoms followed by periods of remission. Pain can be severe enough to keep people from working or even walking.

There is no treatment to cure interstitial cystitis. Treatment is aimed at relieving symptoms. Treatment depends on your symptoms. You may have to try several different treatments before you experience relief.

Some people experience relief after the bladder distention (during the cystoscopy) is done.

During bladder instillation, a "wash" is put into the bladder through a tube in the urethra. It is held for anywhere from a few seconds to 15 minutes and then voided. There are several different types of solutions used. Some coat the bladder and are thought to decrease the inflammation. An example of this is called a Hanno Cocktail that is composed of Heparin and Sodium Bicarbonate.

TENS uses an external device that sends mild electrical impulses into the body. It has been helpful in relieving pain and decreasing frequency of urination in some people.

Interstim therapy uses an approved device which has been reported to possibly provide symptomatic relief in some patients with interstitial cystitis refractory to more conventional treatments. This is an electronic device which is implanted into the sacral nerve roots of the spinal cord. Electrical impulses are sent to these roots in regular intervals. This is meant to modulate the neural output of the pelvic nerves supplying the bladder.

While some patients have reported some relief, they appear to be in the minority. Doctors do not know yet what makes the device helpful.

Some people are able to train their bladder to have better control by setting a regular timed schedule for emptying their bladder. The amount of time between voidings is gradually increased. Bladder training should be attempted only after pain relief has been accomplished.

Surgery is a treatment of last resort. It is used after all other treatment methods have been exhausted and if the pain remains severe. The usual approaches include either increasing the capacity of the bladder by adding a segment of bowel to the distensible portion of the bladder (ie, bladder augmentation) or by removing the entire bladder (ie, cystectomy).This surgeries are rarely done for this condition. Many people continue to have pain even after surgery.

National Institute of Diabetes and Digestive and Kidney Diseases website. Available at: http://www2.niddk.nih.gov/.

This content is reviewed regularly and is updated when new and relevant evidence is made available. This information is neither intended nor implied to be a substitute for professional medical advice. Always seek the advice of your physician or other qualified health provider prior to starting any new treatment or with questions regarding a medical condition.